Selling stories is a job for crazy fellows. I’m not insane, I just sell my stories door-to-door. Rather, I tell them.

Choosing the right story is even harder, if possible.  Something weird happens every time a door unlocks and someone shows up. Standing on the doorstep, for a little moment, everything around me gets black. I feel as if sunk into the void. Then is the light again. Like a vigorous pearl diver, I come up with a brand new story.

I sell words. At a good price. I allow your warm heart to state their value. I trust you.

Buying stories is a job for crazy fellows. 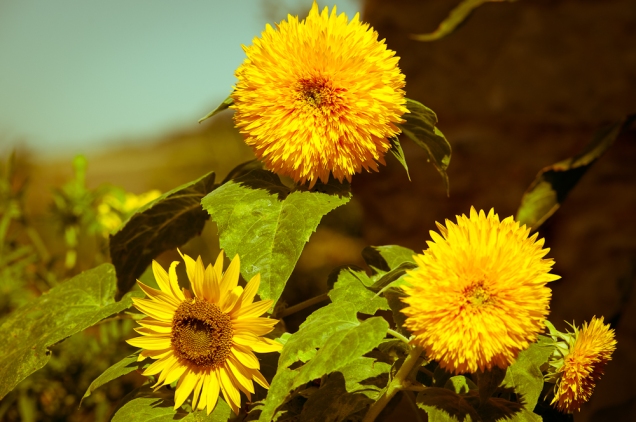 The legend of the sunflower

What an eccentric guy! One day, no one knows why, he decided to capture the four seasons. But, every time he tried to negotiate the terms with the sun, he ended his days, head bowed, counting the grass blades around his feet.

A journal for each story: Wrap leather journal with long lace.

We call it Medioevalis. A long lace gently embraces the journal and the words it treasures. Many sizes, with or without marbled paper boards. 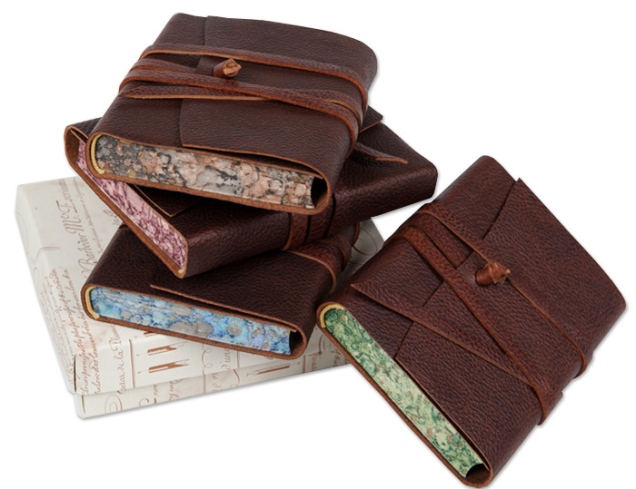 light and vivid figures. Still unfinished but ready to leave, they hustle, bow, wriggle, climb the thin air, leap over the canvas limit and flee.

Whatever I say comes from these signs,

physiognomies which get larger and closer; they catch my hands, plumb my depths and tell me not to rack my brains about that absurd theme of the double, the being and non-being, the void and the fullness, who cares?

I suspect these thin and flexible stripes – unpredictable like water – have found a shelter somewhere.

As if, they and a few other species had found anywhere near a decent habitat and learnt how to carry on in this unstable and exasperate era.

To impose order in this irrational world, I blanketed my artwork, but in the room

visitors kept turning around it, intrigued. Later, three collectors battled against each other to win whatever was concealed from view.

He made the revolution, eventually. In its name, he left me, just trailing the door behind. I have no clear memories of that day but an iron wire ball that still lies on my table. I made it by hand while he was turning around the room listing, with wide gestures and not in order of importance, the principles of the “big cause”.

We never met again until when I stepped into that photo studio. Two huge rice paper chandeliers and a lot of pictures untidily glued to the walls made the room agreeable. I saw him. It was hurting.

I got closer to take a better look. In that black-and-white shot, he was surrounded by friends, the party was on. Smart but moderate, serious but confident, his look went straight to the camera. But the smile was tepid and the eyes darker than usual. In that look I saw the doubt of having been misunderstood growing all over.

Just behind them, only part of the famous motto was readable. The last word indeed: “vencido”. 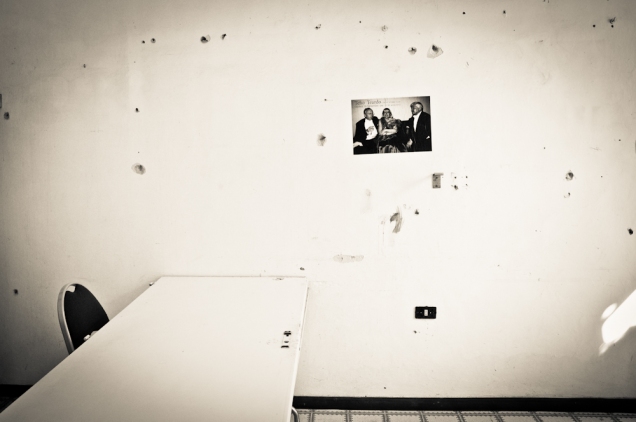 “An expensive illusion of immortality?”

Oh my God, no. I’m just a collector and as a collector I plumb the depth of life through art.

At that time, I was more than that. I was some sort of faithless mystic man. Someone who stands between coexisting contrasts: the plan and the act, the charm and the revulsion, the routine and the unknown.

The picture suited me and I bought it. I was still persuaded that key events could block the clock and beauty unveil the truth. I believed artworks needed the hand, other than the viewer’s eye, to get a motion. And it was not for passion or lust if I dared to touch the line of that pale back far beyond the frame; rather a way to ignite the sacred fire of inspiration.

Then, life taught me I was wrong and man is nothing more that a bright reflection the moment before diving into dark waters. And history lies heavy on his shoulders. How could art represent him without darker, more tangible and denser colors?

It had nothing to do with the photo. I got rid of it ‘cause I changed school of thought.

She flung the door wide open, then went in and threw at me an old wooden frame, abruptly.  I recognized it at once. I took that shot myself at the beginning of my career and it caused – that’s what she used to say – the end of our affair.

It was still nice; a portrait of her, naked, the back turned. A natural geometry made it very interesting but, due to an unintentional mirror game, some details in the scene told more than expected. A piece of blue sky, something vivid but out of focus and the dark silhouette of a branch reminded of the joy of living, while the black dress on the unmade bed evoked nothing but the ghost of the woman who had once worn it. Though in evidence, she looked distant, elsewhere.

That’s why she left me.

So, I decided to get rid of that picture and sold it to a Turkish collector. I chose him impulsively. More than once, I imagined him standing still in the middle of a room in a flamboyant museum full of golden stucco, trying to follow the line of that pale back far beyond the frame and grab, finally, his expensive illusion of immortality.

When I asked her how she got it back, I received a bitter and illogical answer.

“What the hell!” I told myself “I can’t stand flea markets”.

It was the first day of summer. Sitting on the garden wall, we were debating about dynamism.

“What makes space real” you asserted “are – undoubtedly – the objects!”. I couldn’t but disagree because, in my opinion, the only way to define space was through the movement. The idea of sequence imposed itself then, but it was strictly related to the inconsistency in the dissimilarity.

I clearly remember that the conversation got worst when we analyzed the concept of likeness, in other words “how different is what, at a first glance, looks similar?”.

In that moment someone took a snapshot. Here it is. Oh my God, we look so serious!

“Now, tell me. Don’t you find here that livid Hyperrealism of the mug shots?”

I shouldn’t go to sleep after watching movies because when I close my eyes everything turns real, which includes the moon squeaking behind the window pane and the hair becoming needles that prick my fingertips.

So it was that a moon beam entered the room illuminating my soul while observing with a certain curiosity the faded tapestry. The scene – I must admit – was a bit dark and severe, just like those old Flemish interiors and made me feel uncomfortable.

“I like the way you manage the space, it’s effective” she said. “In truth” she added adjusting a crooked frame “I didn’t expect anything so tangible, rather a labyrinth of mirrors, you know..”.

I was on the point of claiming when I woke up. What was she talking about? My usual lack of beliefs concerning the future, perhaps?

This Blog uses cookies. You can manage or block these using your browser settings.

Visit Montepulciano and our retail store

Looking for something special?